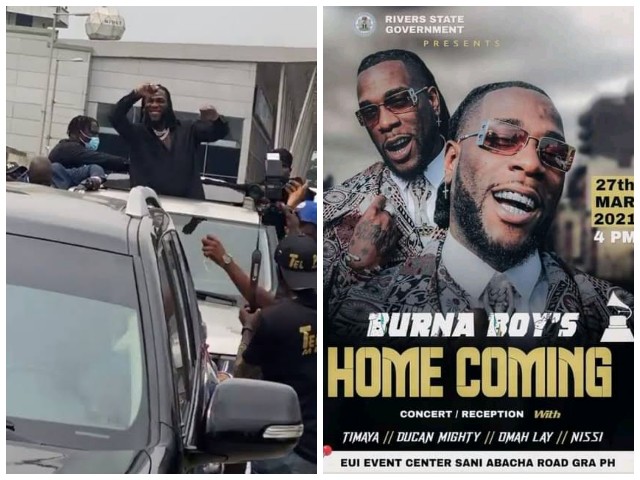 Nigerian popular artist and Grammy Award winner, Burna Boy, was welcomed home by fans in Port Harcourt, the capital of Rivers State on Saturday.
{“type”:”block”,”srcClientIds”:[“857f890c-2aba-40d9-a924-c8a9c4b71640″],”srcRootClientId”:””}
Burna Boy, also known as Damini Ogulu, was received to the state of his birth by Governor Nyesom Wike, alongside his parents, Bose Ogulu and Samuel Ogulu.
The ‘Way Too Big’ star won the Best Global Music Album category at the 63rd Grammy this year, after he lost the Best World Music Album Grammy Nomination to Angelique Kidjo at the awards ceremony last year. This year’s win makes him the first Nigerian to win an award in that category.
The 29-year-old singer, who noted that he was relieved when he was announced as the winner, had also maintained that he deserved to win the prestigious award.
The reception ceremony for the star which also doubled as a concert, was organised by the Rivers State Government to celebrate his excellence in the music industry.