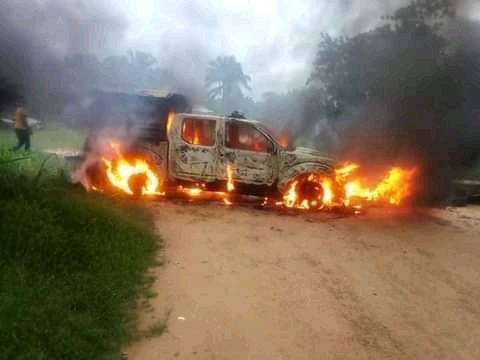 The armed men were said to have destroyed the Senator Godswill Akpabio Unity Hall in Essien Udim Local Government Area of the State.

The Police Area Command and Division in Etim Ekpo Local Government in Akwa Ibom State was attacked by some unknown armed men in the early hours of Wednesday 12th May, 2021, who killed some officers and burnt down some parts of the police station.

An eyewitness explained that “the hoodlums invaded Godswill Akpabio Unity hall today(Wednesday) broke the louvres, the ceilings as well as the plastic chairs inside the hall.”

The statement in parts, “Armed Men, in their numbers, armed with AK 47 rifles and other dangerous weapons, in two vehicles attacked the rented building housing the Etim Ekpo Area Command and Division.

“The Commissioner of Police, CP AMIENGHEME ANDREW who is going round formations and Divisions to ensure alertness and safety of Officers, Men and the People has called on law-abiding Citizens to volunteer timely information that will enable the Police tackle the present security challenges.”