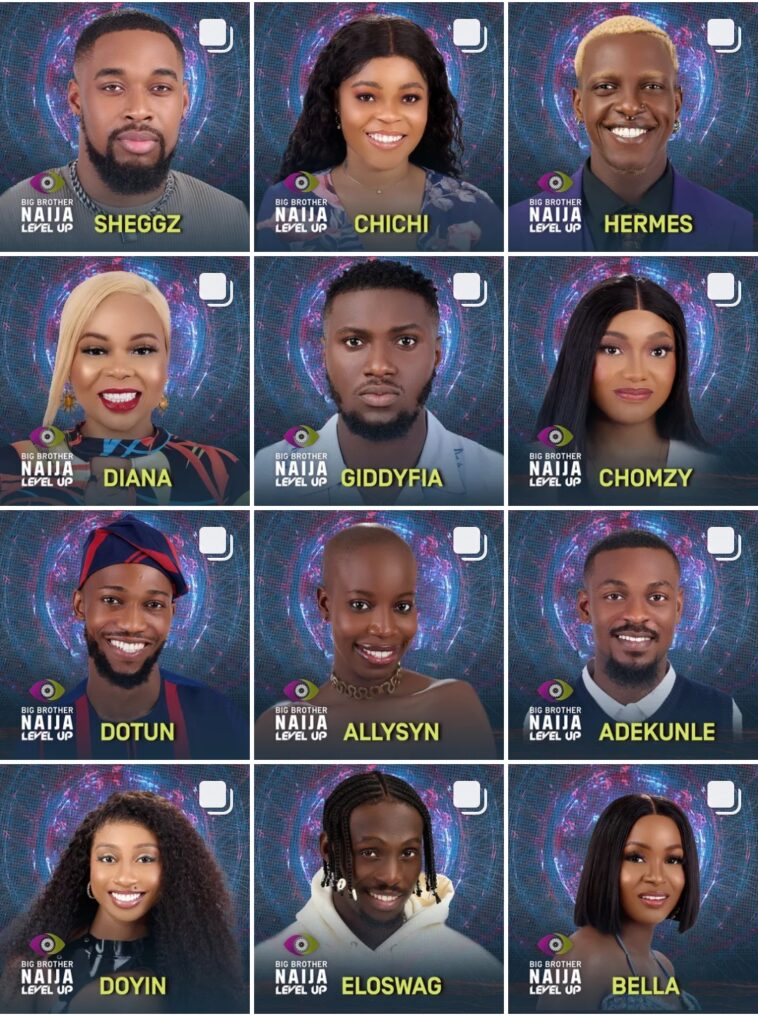 The second part of the double launch show for Big Brother Naija Level Up took place Sunday, 24 July, 2022 amidst high energy from the newly-returned live audience. The host, Ebuka Obi-Uchendu, looked dapper as he introduced 12 new housemates to Africa.

In the first twist for the season, Big Brother ushered the new housemates into a second house. Housemates had during their final auditions played card games to determine who would choose either a coloured card, or a black and white card. Those who chose the coloured cards got into the level 2 house yesterday, while those who chose the black and white card got into the level 1 house today.

The second launch show opened with a performance from Fave. She performed her hit song, Beautifully and her new song, Baby. Blaqbonez, who closed out the show with an energetic performance, thrilled the crowd to his hit song, Bling and also performed his mesmerising song, Go Home.

Below are profiles of the final set of 12 housemates about to spice up your screens for the next 72 days.

Chidimma Esther Okagbue is a 25-year-old fun, energetic UNILAG graduate and content creator. She is a soft girl from Anambra who loves having fun. She considers herself a unique person who likes the cushy side of life, and believes in love at first sight. She describes herself as a fighter. Her biggest issue going into the house would be living with several other people because she likes her space, but she’ll do everything to survive in the house.

The 27-year-old digital marketer and content creator from Lagos has a hidden talent for beatboxing. He believes he is more of a lover than a fighter but has no time for love or a relationship. Eloka Paul Nwamu, real name, claims he’ll bring light, music and a lot of flavour to the house. Besides being lively, confident and talented, Eloswag, who counts his mom as his superhero, reckons he is a hit with the ladies.

Doyinsola Anuoluwapo David says her personality is a mix of Michelle Obama and Cardi B. The 26-year-old always tries to have a positive outlook on life and is good at multitasking. She is both a lover and fighter from Ondo state. She brings positivity, energy and a little gbas-gbos to the BBNaija Level Up show.

Adekunle Tobilola Olopade, aka God’s very child, is a 27-year-old digital marketing consultant from Lagos. He considers himself “a self-actualised introvert” who takes pride in being a giver that solves other people’s problems. He believes in love at first sight and is 101% excited to be in the house.

Osy Allysyn Audu is a ‘baldie’ obsessed with lip gloss. The 25-year-old is a big believer in love at first sight. She considers herself a loyal friend and expects the same energy from those closest to her. As a “huge fan of love”, Allysyn is currently in a relationship and enjoys how love helps her see herself in a new light every day”. She’s a model who hopes to continue modelling after the show and hopefully become a presenter.

Oladotun Mofiyinfoluwa Oloniyo enjoys working out, watching movies, going on dates and singing. The 26-year-old is the second medical practitioner on the show this season. Dotun works as a  medical physiologist at a hospital and moonlights as a personal trainer on his days off. He will bring lots of energy, entertainment and sexiness to the show. The Ekiti State indigene counts being crowned Mr Tourism Nigeria 2018 as a proud moment, alongside graduating as one of the University of Ibadan’s top students in his speciality a week later.

Esther Chioma Ndubueze will most likely cause a lot of trouble in the house because she says she has a bit of pride and people hate that about her. The 22-year-old hates snitches and betrayers and considers herself a creative and passionate people’s person. The entrepreneur believes in love at first sight sometimes but is currently single. She is from Imo state.

Gideon Anieti Nwawo is a team player who enjoys playing around. The Akwa Ibom indigene got the ‘fire’ in his name from friends because he works very hard. However, he spells it as ‘fia’ from Davido’s Fia song as a sign of his love for the award-winning artist. The 24-year-old engineer respects friendships and tries to avoid drama and betrayal. He has many friends but is careful to let only a few people in.

Diana Isoken Edobor is a 33-year-old project manager. Even though she is the oldest housemate, she proved from her entrance that she might just be the spiciest. Born in France but from Edo State, she is sociable, family-oriented, passionate about self-development, and loves learning about new cultures.

Hermes Chibueze Iyele is in the BBNaija Level Up house to tell stories. Perhaps the most exciting thing about the performance artist is that he is in a polyamorous relationship and has two girlfriends. Despite this, he says he gives his all in relationships and is not open to getting a third girlfriend in the house. He has been able to perform some of his original dance pieces at reputable festivals in Lagos, Glasgow and Rotterdam. He has also appeared in music videos for afrobeats stars, including Burna Boy, Davido and Ajebo Hustlers.

Chinenyenwa Desire Okoebor is an exotic dancer from Edo state. The 22-year-old calls herself a sweet psycho who is bringing originality to the house. She describes herself as an audacious chef who is not afraid of telling her truth and sharing her desire and passion. Chichi wants to be on Big Brother Naija to show people there is more to being a stripper than meets the eye.

Segun Daniel Olusemo is a 26-year-old actor and professional footballer from Lagos. After the very warm reception he got when Ebuka announced him, he is already gearing up to be a ladies-favourite this season. Although currently single, he loves relationships but believes it is essential to find the right person. He describes himself as talkative when needed but a good listener and considers himself down to earth, relatable, and ambitious.

There are now 24 housemates vying for the ultimate title of BBNaija Level Up winner and the ₦100 million grand prize. This season, Big Brother Naija will air on two DStv channels (channel 198 and 199) and two GOtv channels (channel 29 and 3). The fans’ favourite Ninjas are also back, and the first Head of House games will hold on Monday.