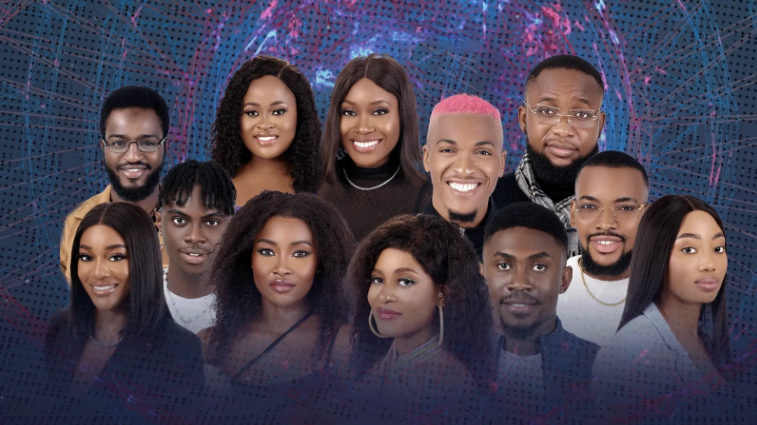 Finally, the long waited Big Brother Naija Reality TV show Season 7 which is tagged “LEVEL UP” has officially been launched.

The names of the first 12 housemates were announced during the live launch show on Saturday 23rd July, 2022. The first contestants comprise of 6 male and 6 female to mark the beginning of the Reality show.

Amaka who calls herself Nigerian Nicki Minaj is 23 years old health care worker and she is a native of Anambra.

This self-professed daddy’s girl has only one sibling, is the only girl in her family and loves generous men. Her motto is: ‘Grab the bull by the horns and forge ahead’, which has helped her navigate the highs and lows life throws her way. Amaka confesses she signed up for Big Brother Naija to not only win, but to have fun, meet new people and to pepper all her exes.

She also described herself of being between a spoilt brat and disciplined child.

Beauty, whose full name is Beauty Etsanyi Tukura is a 24 years old Lawyer who hails from Taraba State. Beauty won the Nigerian beauty Pageant in 2019.

Beauty describes herself as a generous, open, reliable free-spirit and believes if she puts her mind to anything, she surely will achieve it. One of the lowest points in her life is when she had to rewrite the Nigerian Bar Exams after failing the first time. As the last born of four siblings, Beauty enjoys the love, constant guidance and unwavering support this position affords her.

Bryann whose real name is Brian Chukwuebuka Chiji, is Singer and songwriter Bryann counts Wande Coal, Vybz Cartel and Angelique Kidjo as some of his musical influences. The 24-year-old who hails from Imo State started releasing music in 2019, and finally put out a full-length project in 2021.

Christy O whose real name is Christiana Oluwafunke Ojumu is a 24 years old beauty entrepreneur who runs a cosmetics business and modelling stuffs in her free time. Christy hails from Ondo State.

Christy described herself as a “funny, smart and hardworking extrovert” and admits you are more than likely to find her “where the fun is” on any given day. When she’s not hiking or enjoying a picnic with her close friends, Christy O makes time to write poems.

According to Cyph, “I’m goofy, sociable and playful too though, so that balances it out,” he says. His motto is: ‘You only live once’.

Daniella explained that she hates bullies with a passion and believes in fair play, so she usually steps in as “the defender” during heated arguments.

Groovy who real name is Henry Olisaemeka Orakwue is an ambitious 26 years old Artist, fashion entrepreneur and model. Groovy has a B.Sc. in Biochemistry from the University of Lagos and loves working out and maintaining a healthy lifestyle.

Groovy described himself as “a positive, self-sufficient, supportive person” and believes his winning mentality never fails to push him and those around him to greater heights.

Ilebaye whose full name is Ilebaye Odiniya is 21 years old. He a criminology and security studies graduate and entrepreneur. She loves swimming, partying, bowling and shopping, and considers herself a controversial, adventurous go-getter.

Kess whose real name is Kesiena Tony Adjekpovu. Kess is a married 28-year-old businessman who enjoys living life to the fullest. Family means the world to him and he even counts one of his brothers as his best friend. “He is like a twin brother to me. I love my family. Our struggles made us stronger and I’m blessed to have them in my life”.

He describes himself as a “showstopping, jaw-dropping human being” and takes pride in his talents. “I can do almost anything. I can sing, but not on Wande Coal’s level, sha. I dey dance small. I sabi act small. I have never pursued any of this seriously because man need to survive first,” he says.

Khalid whose real name is Ismail Rukuba Ahalu is a gallant 24-year-old Freelance graphic designer and muralist who loves to try new things and considers himself charismatic. Khalid hails from Plateau State.

He enjoys archery, skateboarding, basketball, watching anime and also has a keen interest in mythology

Khalid himself as “Chronically single”.

Pharmsavi whose real name is Saviour Ikin Akpan is a Licensed pharmacist, a multitalented extrovert with “an amazing sense of humour”. Pharmsavi hails from Akwa Ibom State.

Pharmsavi enjoys travelling, dancing and playing video games, and has a large network of friends, courtesy of his boisterous, friendly personality. He dislikes hypocrisy and deceit and considers himself emotional and competitive. He loves graphic design and when he has time, you will find Pharmsavi playing table tennis.

Phyna whose real name is Ijeoma Josephina Otabor is 25-year-old who described herself as been “allergic to malice”. Phyna hails from Edo State.